The holly family consists of woody shrubs and trees most of which are evergreen, the leaves staying green throughout the winter. Flowers are inconspicuous, often small and cream-colored, with parts in 4 to 8. Male and female flowers are on separate plants, referred to as being dioecious. The ovary is above the point of attachment of the sepals and petals, referred to as the ovary being superior. The family is known for it’s colorful berries, which are often red. Although referred to as berries, they are actually drupes with a single pit in the center, as opposed to berries with multiple seeds inside. Members include English holly, American holly, and winterberry. 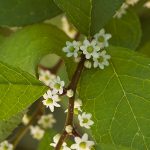